Highly qualified and accomplished software engineer with more than 15 years of consulting and software development experience for healthcare, research, education, and government.

My education and training.

I began writing computer programs at the age of 10 using the BASIC programming language for MS-DOS.  Later I became a Pascal guru and used my talents to write programs for a neuroscience research group and for a college.  After graduating from medical school in 1998 I opted to pursue a career in software development.  I undertook programming projects with the Veterans Administration (VA), the American Medical Association (AMA), and other healthcare-related ventures.  I spent about five years teaching computer science at the undergraduate level, and now I work as a software developer for the VA. I reside outside of Dayton, Ohio where I enjoy working on our small farm tending to our gardens, orchard, and bee colonies.  I am husband to a beautiful wife and proud father of two boys.

I am passionate about software development and I love to code. My areas of coding expertise include the Java programming language and Java Platform, Enterprise Edition (JEE), and many Java technologies and APIs such as servlets/JSP, JDBC, JPA, JAXP, JMS, JCA, JAX-RS, JTA, and EJB.  Development tools I use on a daily basis include the Eclipse IDE, Subversion and Git, Ant and Maven, JUnit, Bugzilla, and HelpNDoc.

I develop enterprise software applications for healthcare and education, and typically host these applications on leading enterprise application servers such as JBoss AS and Oracle/BEA WebLogic Server.  Most of these applications are based on an n-tiered architecture, with middleware implemented in Java/JEE, a data source such as a SQL or "NoSQL" database, legacy systems such as the VA's VistA EHR or other backend system, and a Single Page Application (SPA) for the client.  Client-side technologies I develop with include HTML/HTML5, CSS, and JavaScript, Ajax, JSON, XML, XSL/XSLT, and Sencha ExtJS and Touch.

A large component of my enterprise development includes writing Web services that expose data and business logic through SOAP and REST architectures and protocols.  I specialize in developing service-based interfaces to legacy systems that allow them to interoperate with third-party applications and systems.  Applications that I develop from the ground up as well as interoperability interfaces that I design are often implemented as a service-oriented architecture (SOA), providing data and functionality to other applications through standard protocols.

I also develop native Windows applications using Borland Delphi/Embarcadero RAD Studio.  I work with a number of databases including MS SQL Server, MySQL, PostgreSQL, and MongoDB.  I develop on Windows 7, Apple MacBook, and Linux desktops.  I manage around 20 RHEL Linux servers as a part of my work for the VA.

I love learning new languages and technologies, and lately I've been experimenting with Node.js and associated frameworks (MEAN.js and Sails.js).  I'm also interested in data analysis, and am learning to use the NumPy and pandas libraries for Python.

Description: My role is to develop clinical software applications to support patients and providers within the VA enterprise. I work closely with physicians, nurses, administrators, and clinical applications support specialists to develop innovative software solutions to meet the need of challenging health informatics problems. As a developer and co-principle investigator, I have helped our local innovations team to secure six VHA Innovation Grants to develop new clinical applications. In addition to development, I manage and support the applications I create and the servers that host them. At present I administer around 20 RedHat Linux servers,

Description: I taught undergraduate courses in computer science and a few in biology.

Description: As a freelance software developer and consultant I have worked with a variety of clients in healthcare and education to develop software applications to solve complex problems. Solutions that I have created as a contract software developer/consultant include: I developed a number of clinical applications for the Veterans Administration and consulted with other healthcare entities; I've created applications for educational institutions for administrators, teachers, and students; I have worked with the American Medical Association's Physicians Accessing the Internet project in teaching physicians the basics of accessing the Internet, using the Web and email in their medical practices, and the basics of Web site design via hands-on workshops in major cities throughout the country; I reviewed several technical exams for Bookman Testing Services, Inc including COM/DCOM, Delphi Programming, and Windows NT Application Development. I also authored a Delphi 4 Programming exam in 1999.

A representative sample of projects I have worked on or am working on. 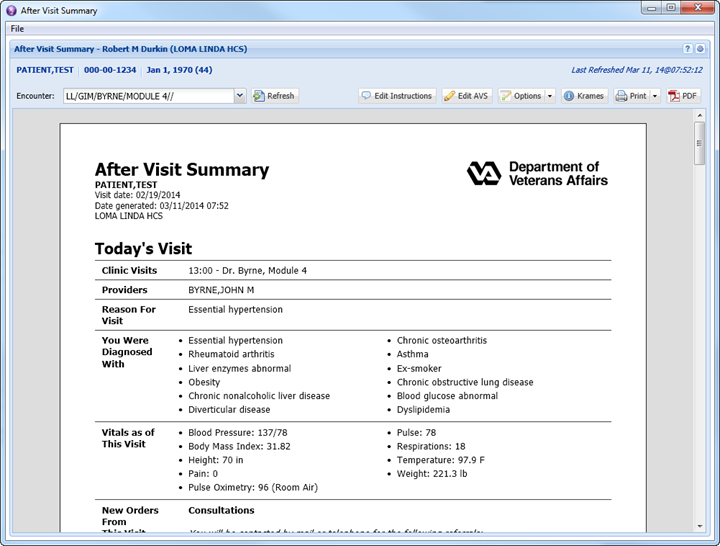 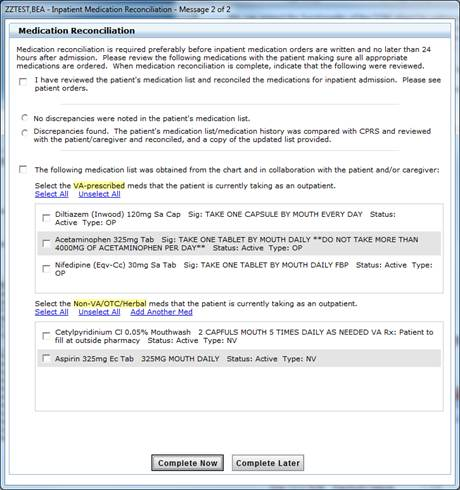 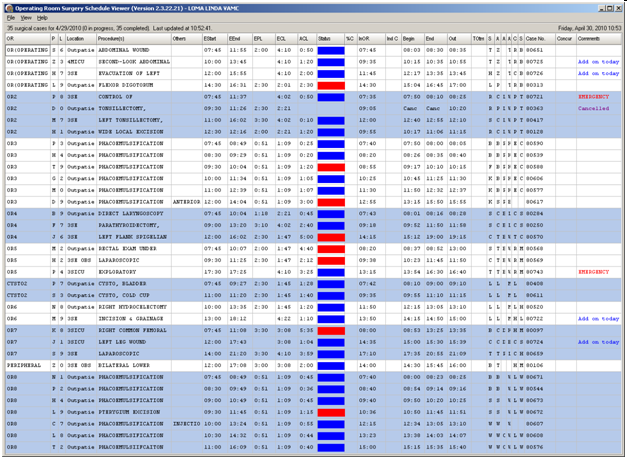 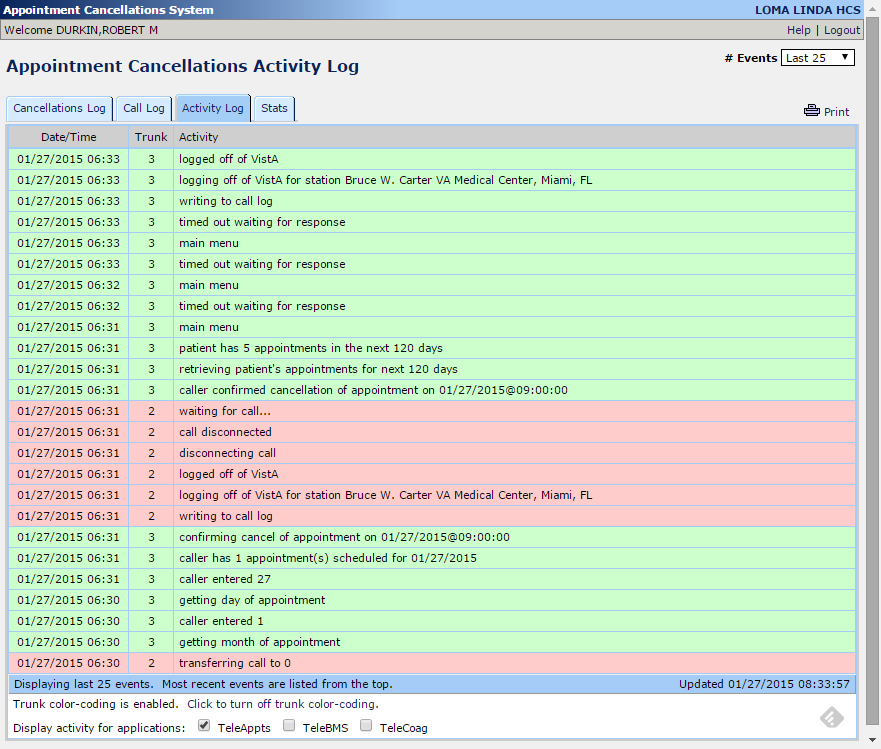 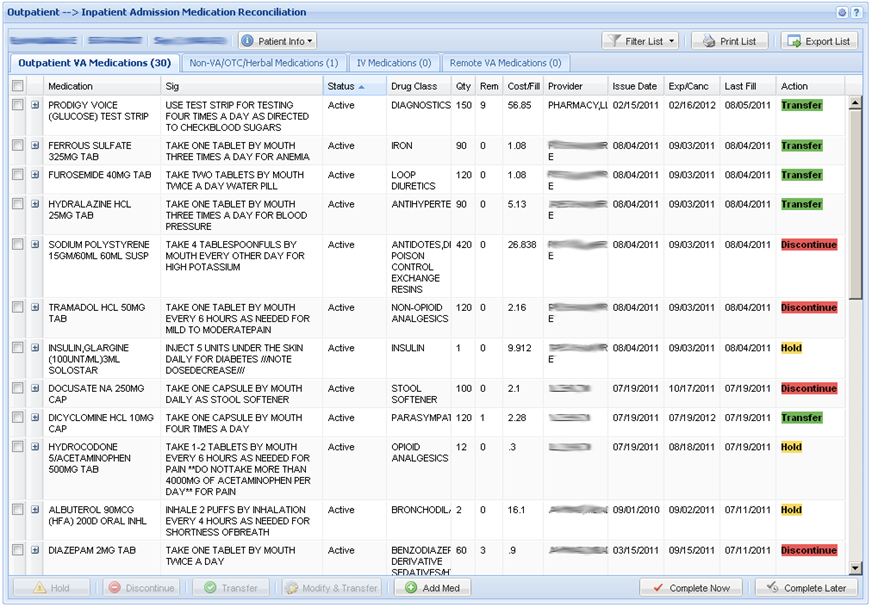 Developed a medication reconciliation application that integrates with the VA’s CPRS via the LLVA CPRS COM Object to remind clinicians to perform and document medication reconciliation for newly admitted patients. The tool presents the patient's medications to the clinician on a form. Checkboxes allow the clinician to select which medications will be continued during hospitalization and which will be discontinued. When the form is completed, a progress note is automatically generated and uploaded to TIU. This application is currently being used by several VA facilities. 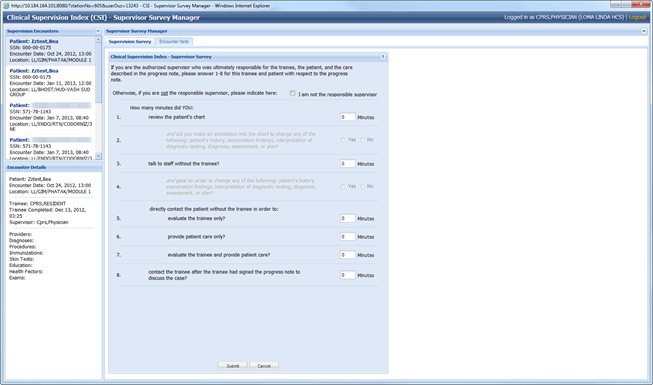 Developed the software that is to be used in a nationwide VA research study involving resident supervision. The Clinical Supervision Index (CSI) software involves electronic questionnaires that are delivered to resident trainees and attending supervisors via the LLVA CPRS COM Object upon note signature. This software is currently under review for Class 1 status with the VA. 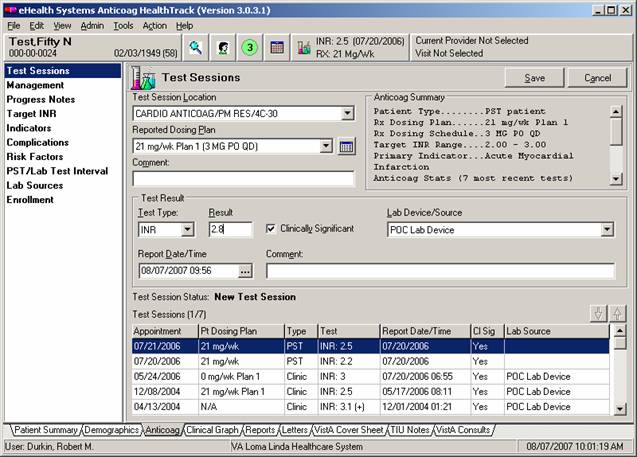 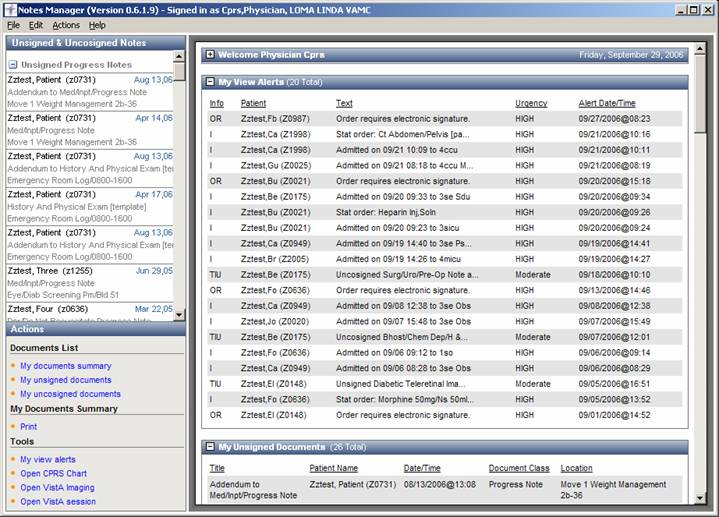 Notes Manager is an application that allows providers to review and sign all of their unsigned/uncosigned notes in a single comprehensive list. The application also allows providers to edit, addend, and delete notes, assign additional signers, and process view alerts. Use of this application within one facility brought the number of unsigned notes down to nearly zero. The client was developed using Delphi with business logic and VistA data access implemented on the VA AppServer with SOAP communication between client and middleware. 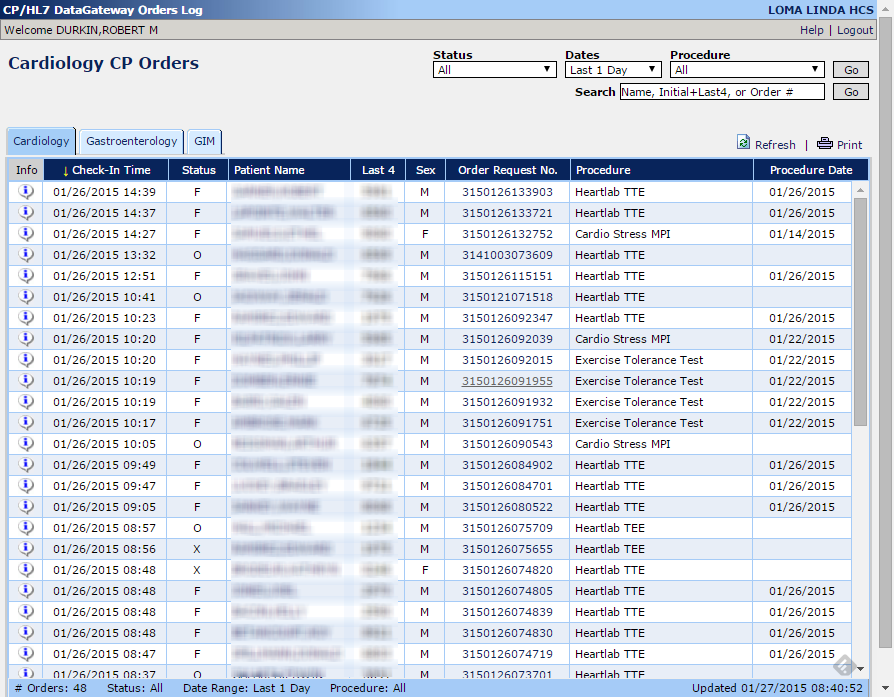 Developed CP/HL7 DataGateway, J2EE middleware that is used with VistA CP-enabled medical devices such as Heartlab, Olympus, and Pentax instruments that parses HL7 messages sent from those devices and populates TIU notes with the results data allowing clinicians to view the text results in the CPRS Consults tab. This software was approved for VA IT Region 1 use and is being rolled out to facilities within Region 1. 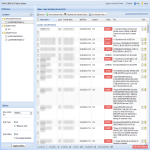 I developed VistaBroker, a Java object-oriented API and wrapper around VistaLink. Allows developers to write J2EE applications that interface with VistA without the need to parse M strings returned from RPCs since results are encapsulated in JavaBean objects. Also wrote Web services (SOAP) wrappers around this API allowing clients written in virtually any language to connect to VistA and call RPCs.

JavaBroker is a Java-based implementation of the VA’s Delphi RPC Broker client and an object-oriented library of RPCs and data objects encapsulating results from the broker server. Allows Java developers to write standalone and Web-based Java applications that interface with VistA. 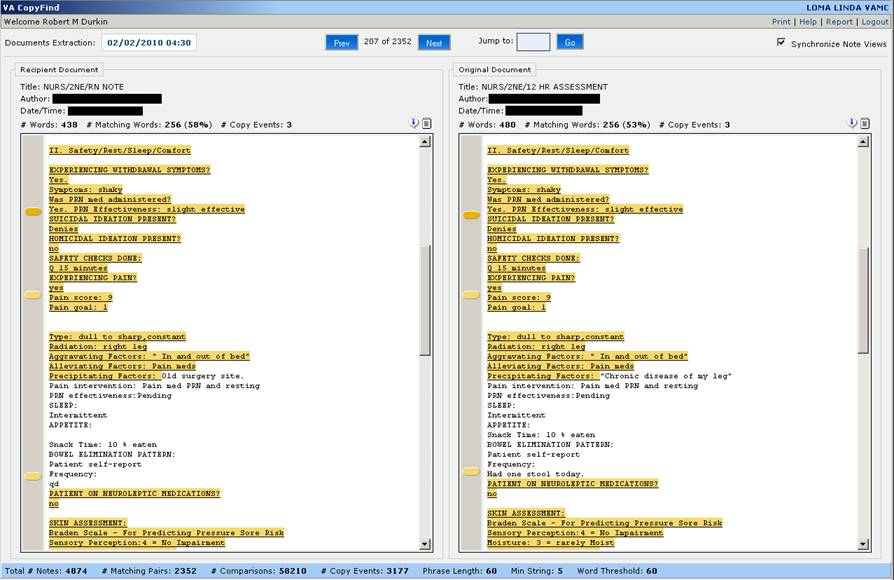 Customized the FOIA version of the VA’s CPRS for EHR Doctors, Inc. to allow providers to copy/paste CCR/CCD documents into a plain text TIU note via the Notes tab interface of CPRS. The modifications allow for the CCR/CCD XML data to be displayed as HTML in an embedded Web browser.

Developed a Web-based electronic document review and signing system for Kettering College that allows students to electronically sign documents and forms, and administrators to add and modify documents in the system and view reports. Written in Java J2EE and JSP and hosted on JBoss AS. 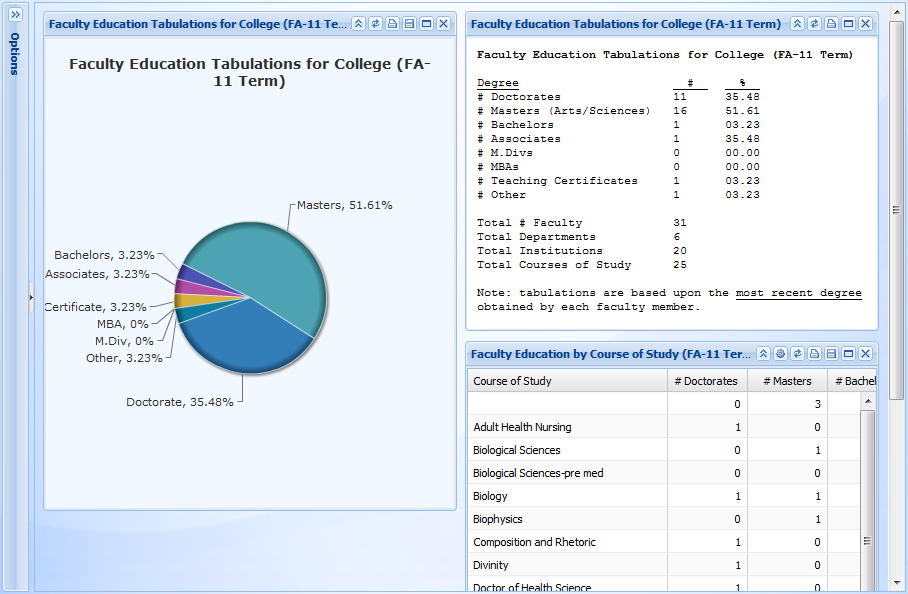 Developed a Web-based Academic and Enrollment Dashboard for Kettering College that allows administrators and executives to view high-level as well as detailed academic information as well as enrollment data and compare this information to previous school years. Written in Java J2EE and JSP and hosted on JBoss AS. 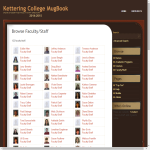 Developed a Web-based MugBook application that allows users to view pictures and profiles of students and faculty. Users may edit profiles, add friends, view class rosters and many more features. Written in Java J2EE and JSP and hosted on JBoss AS.

Lead developer for the eHealthRec software initiative for the Office of the Chief, Army Reserve (OCAR) and Veterans Administration (VA). This project involves providing electronic versions of medical record forms for the active duty reservist and storing the data into the VA electronic medical record. The system is written in Java and Delphi and based on Web services technologies and protocols (XML, SOAP, WSDL).

Designed and developed VA Report Wizard™, a medical discharge summary application for physicians and nurses at a VA hospital that significantly reduces labor by automating data entry and document generation. By eliminating the need for dictation services or other costly transcription services, the application has saved the hospital hundreds of thousands of dollars and has improved the quality of patient care by saving important patient information in electronic format so that physicians in VA hospitals across the nation can easily view patient discharge summary information.

Developed VA DataGateway™, software that provides a data link for third-party databases to the proprietary medical records system of a VA hospital. This software is used to upload thousands of medical records from third-party sources, such as Helix and MS SQL Server, to the hospital's database system. The software is used to automatically bring valuable clinical patient data to the physicians desktop computer where they had previously relied on phone and fax to retrieve this information.

The After Visit Summary: Patient-Centered Communication for PACT patients.